Now we were on the coast we thought we’d be sunning our bright white bodies into our usual healthy tan – ha ha!!! The nights weren’t as cold at least. Onwards to Cervantes (had to bypass the Pinnacles AGAIN as no dogs allowed). We found a dog friendly beach to have smoko and enjoy the ocean views. Then on to Jurien Bay where we stocked up on groceries, nice foreshore. Then on to Green Head then to an overnight area called Billy Goat Bay just off the coastal highway. Just a carpark so we just parked where we could. Nice beach and views from a nearby cliff. But by 3-4pm we were surrounded! We literally had a caravan 30 cm’s from our front bumper!!

Luckily most people stayed only overnight so we stopped a few nights. We did have a couple of sunny days…Yay! We packed up then visited Leeman – pretty coastal town, cheap fuel, dump point and good fish n chips! We decided to go inland to Eneabba – we had visited there last year and liked the town. We stopped on their oval this time – 72 hrs, $5 per person per night, toilets & showers provided. Beaut value! And the best thing was the Miners Mess in town – $10 per head buffet meals 5:30-7pm. We went twice! We got friendly with the Shire workers who collected the money for accom. each morning. We stayed longer than 72 hrs as the weather was good, the wildflower walks and the atmosphere was great. Highly recommend this as a stop along with Lake Indoon about 15minutes from town.

From here we went to Port Denison and Dongera. It was election weekend so we thought we’d be able to vote here. As it turned out no, we would have to drive to Geraldton! We stopped at town oval for the night, 24hr RV stop. Bit noisy as right next to Brand Hwy, but we were there for a purpose. Dongera has some historic sights – Russ Cottage, Priory Hotel and Flour Mill. Tree lined main street makes it very attractive. We moved on to Cliff Head around noon. We found a spot overlooking the beach on a large open area. Great! This is a free 72hr stop along with another north and south. Brand new drop loos too. Really enjoyed our stay here until the wind came up – we had to move behind the cliffs for protection as it was fierce. We enjoyed cooking on our fire pig, roasts and Shearers Rum Buns (rum soaked sultanas in scones) – we don’t skimp in the food department!

Next coastal stop was 7 Mile Beach north of Dongera – also a car park but lovely views of the ocean. First night was great, but the second we had the worst weather we’ve encountered in over 12 months. The wind and rain was fierce! We couldn’t leave the van for long (Jeda pee breaks) and it continued for 2 days! What they say about WA is true – Windy Always! 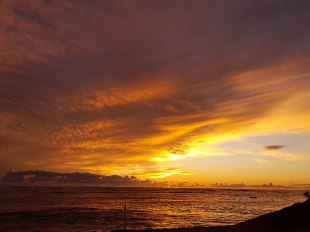