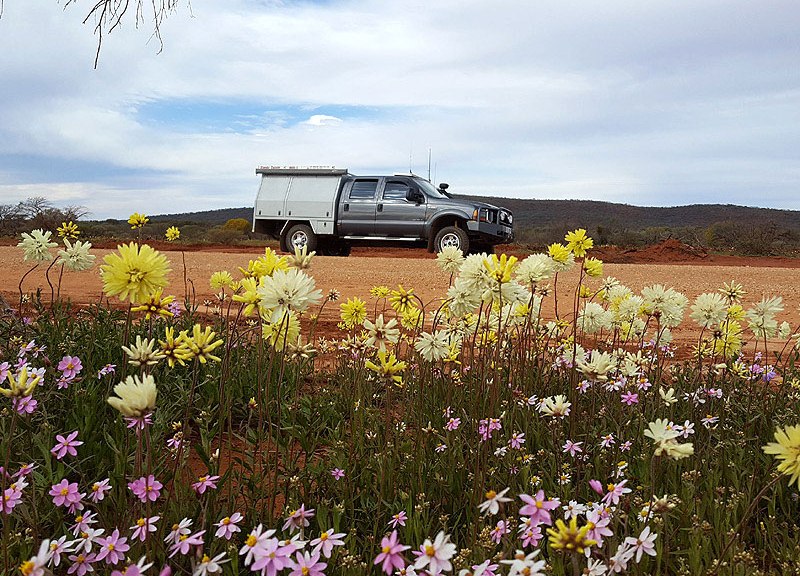 Due to bad weather we headed to Geraldton to a van park to wait out the rain & wind. But after a couple of days we realised we’d just have to head off…somewhere!

So after checking out some more coastal towns, Horrocks Beach & Coronation Beach we went inland to Northampton then on to a tiny town called Yuna. It’s a 72 hr stopover with toilet & water behind a hall. Quiet and surrounded by crops. We had very cold days & nights due to the wind, but good time to catch up on stuff.

We met a number of Travellers that kept us entertained over the 3 days. Then we moved on further east to Yalgoo as I’d read a van park had just been refurbished and it had good reviews on Wikicamps (my 2nd favourite travel bible after Camps Australia). The reviews were right – nice neat small park, brand new mud brick uni-sex amenities, reasonable rates & friendly managers (also Travellers).

So we made it our base for a couple of weeks. As it was mid July by now the wildflowers were coming into bloom which gave the area a pretty lift. We visited Joker’s Tunnel – an old gold mine. It had it’s own tenants – bats. We also did a day drive to Payne’s Find via dirt road and the everlastings were breathtaking. We also encountered Emus, Roos and Wedgetail Eagles along the road. The Gold Battery was closed so we kept going to Mt Magnet. As we’d been there before we headed out on a backroad to Dalgaranga Meteorite Crater – the smallest in Australia. (Don’t go out of your way to visit it, it’s very under-whelming).

Early August we headed back to Geraldton to get some things fixed. We stopped in Geraldton’s new RV Stop near the Info Centre in the car park. It had a great Esplanade to walk along and seals that sun themselves on the rocks. It’s right next to the port so it’s a bit noisy and it’s very well lit! You can watch the tugs guiding the ships out of port for some entertainment! Once all our repairs were done we headed to a favourite spot east of Geraldton – Ellendale Pool.

It had been raining and it was a bit sloppy getting in, but we managed and set up camp. It has two areas to park, flushing loos & a dump point. The cliffs opposite are beautiful in the am & pm. If it wasn’t for the bad weather and Jeda being sick we would have stayed longer. We encountered heaps of orchids and 3 visiting Echidnas!