This blog is a bit delayed as we are now in Ceduna SA, but I’d still like to tell about two beautiful areas we found before heading across the Nullarbor again plus our drive around Esperance….

Esperance: we did the obligatory 40 kilometre Great Ocean Drive. This took us to some amazing beaches: West, Salmon, Picnic, Twilight, 11 Mile & Observatory Point. We had our days exercise walking up the trillion stairs at Observatory Pt to take in the views. At 11 Mile, which is the end of the beaches, we had smoko overlooking a spectacular beach and swimming shallows. Highly recommend this drive….

Other sites not to be missed would be the Whale Tail sculpture on the foreshore, a walk along the whole foreshore area including a look at the old Tanker Jetty. We didn’t get to visit the Tearooms, but Taylor’s Cafe is said to be a good feed.

Early March: After leaving Esperance, WA we headed east to a couple of camp areas – we visited Membelup Beach – rough, long track in but no available sites big enough for us and very mozzie-fied! Earlier that day we’d found the most beautiful area, Wharton & Little Wharton Beaches, in Duke of Orleans Bay. As we are unable to go into Cape La Grand National Park because of our dog Jeda, we found the next best thing. This beach is pristine! We made a note to come back later.

Alexander Bay east of Duke of Orleans Bay –  we arrived a few days before the WA Labour Day long weekend, but the campsite was nearly full. We unfortunately had a ‘boggy’ problem trying to get to a sandy site, but I won’t elaborate on that 😦  We eventually found one area in the Fisherman’s Camp that wasn’t boggy & wet so we nabbed it. As it turned out we were neighbour-free all the long weekend – sweet!

We spent 5 days there fishing, walking the beach, enjoying the sunrises and sunsets and generally chilling. After the long weekend we packed up and headed back to Wharton Beach. It was beautiful. We spent most of the day enjoying this beach & photographing the amazing turquoise waters before stopping at Condingup Reserve for the night (free camp at the sports ground).

Before the big trek across the Nullarbor, we stopped for a couple of nights at Grass Patch Park n Stay, a small community run van park with clean public amenities and gravel sites (they also offer free washing machines). We enjoyed yaks with the locals and walking around this little quiet town.

From here we headed to Norseman for fuel then it was onto the Eyre Highway for the 1200+klm trek to South Australia!! 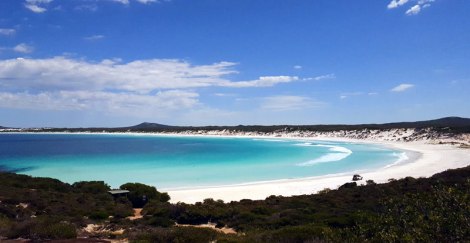